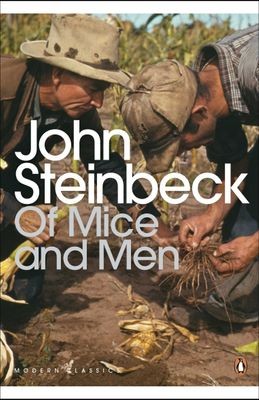 Of Mice and Men (EDU)

Steinbeck refuses to allow himself to be pigeonholed. This is as completely different from Tortilla Flat and In Dubious Battle as they are from each other. Only in his complete understanding of the proletarian mentality does he sustain a connecting link - though this is assuredly not a "proletarian novel". It is oddly absorbing - this picture of the strange friendship between the strong man and the giant with the mind of a not-quite-bright child. Driven from job to job by the failure of the giant child to fit into the social pattern, they finally find - in a ranch - what they feel their chance to achieve a homely dream they have built. But once again, society defeats them. There's a simplicity, a directness, a poignancy in the story that gives it a singular power, difficult to define. Steinbeck is a genius - and an original. (Kirkus Reviews)